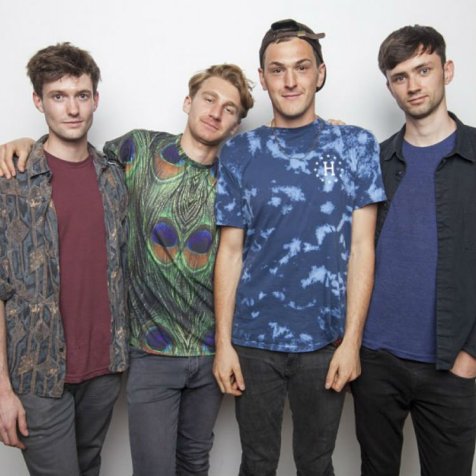 “Who do they sound like?” my roommate asked. I threw a couple bands at him but didn’t feel great about my comparisons. I fancy myself as a bit of a music encyclopedia, my brain filled with useless bits of facts and trivia instead of, you know, practical stuff like food recipes or how to change a flat tire or adequately tie a suit tie (unreal, I know).  Typically I could rattle off a few popular contemporaries so he would be enticed enough to check ‘em out, but this time I was stumped. Since hearing them a few months before, I had trouble putting my finger on how to accurately label their sound. I couldn’t describe why I liked them so much but damn, they were good.
I first heard of Glass Animals in the summer of 2015, as they were making the rounds on the summer festival circuit in the “New Band about to Blow Up” slot. My girlfriend had been a big fan for a while and gave me the tip, while simultaneously buying me a ticket for their upcoming show in Chicago. As is the case with most new music, it took a few listens before I could safely say I enjoyed it. But before long, I was hooked. Simply put – the band’s 2014 debut Zaba is sensational, a cool 12-track tour-de-force.  The English indie rockers showcase their smooth sound, layering subtle electronic-laced tones over off-beat lyrics. I hate  to use the word ‘chill’ (ugh) in labeling their sound, because Glass Animals has a way of being dance-y despite their undeniably laid-back sound.  “Black Mambo”, “Gooey” and “Hazey” are choice tracks, showcasing their musical vibe and quirky wordplay (and song titles)

Their live show at the Rivera (the Riv, as cool kids call it) was among my favorite of the year. I was apprehensive before the concert, worried that their quiet sound and small song catalog may not translate so nicely to the live-stage in a big room. I was quickly proved wrong, as they roared thru their hour and half set, finishing with a lively version of fan-favorite “Pools”.  Lead singer Dave Bayley danced his way thru Zaba hits, flanked by his bandmates on various string and synth-based instruments. I was very pleased with the act and jumped at the chance to see them again at the same venue in October of this year. As new singles “Life Itself” and “Youth” climb the current alternative radio charts, it’s time to get excited for the much anticipated second album How to Be a Human Being.

This is a text widget, which allows you to add text or HTML to your sidebar. You can use them to display text, links, images, HTML, or a combination of these. Edit them in the Widget section of the Customizer.