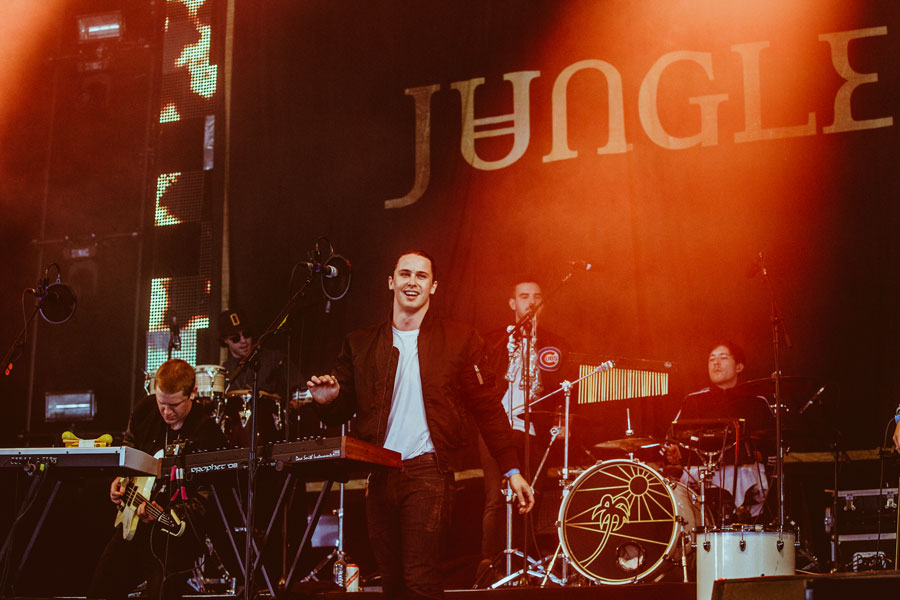 People tell me I’m a somewhat of a vanguard – I blaze my own trail. When people zig, I zag. I march to the beat of my own drum. The grain? I go against it. So at Lollapalooza a couple months ago, when it was time to either join the flock of people to watch Bruno Mars, or follow the hoards of jersey-clad partiers to Dillon Francis, what did I do? You guessed it, I took my trailblazing talents to the secluded Grove stage with my girlfriend to see a (relatively) lesser-known band called Jungle. Of course, most of this isn’t true. I’m a sheep and a follower, through and through. But what IS true is that while my fellow concertgoers gathered in sea-like audience for the megastars mentioned above, I had the pleasure of discovering a new favorite band.

Jungle encompasses everything we’ve come to know for modern, hip music artists. Teen-aged music geeks who began creating tunes in a dorm/bedroom, starting on computers and keyboards, eventually morphing into full-fledged, kick-ass live bands.  It’s a recipe for success, folks. UK-based Tom McFarland and Josh Lloyd-Watson comprise the core of the band. The duo were neighbors growing up in London and played music together for years before conceiving the ambitious idea for Jungle. The two erupted onto the scene via viral popularity, levering spins on Soundcloud and music video views into a deal with UK-based XL Recordings. As their star rose, the two brought along several more members, including a variety of instrumentalists and Motown-y backup singers.

Jungle’s sound resembles more 1970’s soul than any genre featured on most modern playlists today. McFarland and Lloyd-Weston utilize a falsetto singing style that pairs perfectly with the eclectic, funk-driven instrumentals. The resulting sound is a wonderfully unique blend of styles, and the punchy bass and guitar riffs make it nearly impossible to refrain from tapping a toe or two. Jungle’s two albums to date are certianly fantastic treats to the ears, but what makes this band so special is the live ensemble. Ask anybody who’s had the pleasure of seeing these guys in person – it is an experience indeed. The two leaders of the group are notoriously humble, and  only identified by their respective initials “J” and “T” during the early days of the band. That predilection for anonymity and team spirit only strengthens and propels the group forward as a compelling collective unit during live events.

I just love unique groups like this, plain and simple. From the creative videos, to the live shows and makeup of the band – these guys operate in a world all of their own. Its new and its refreshing and I plead with all of the readers to grab tickets when these guys make it to your hometown. Or at the very least throw it on at your next party, and thank me later.

Oddities: While the band now tours and interviews frequently, the group was popular for months before the general public knew the names or identities of the two founding members